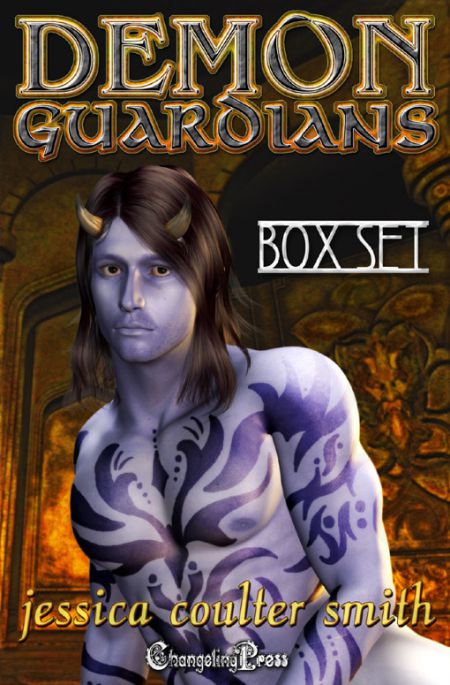 Demon Guardians: Sexy, seductive demons craving submission. For centuries, they’ve stayed silent, hidden, observing and interfering without being detected. Each guardian demon has a charge to watch over, and it’s always a woman. But there’s only so much a demon can take…

Bale. Alia’s a magnet for trouble. It’s time for her reckless behavior to stop, before it gets her killed.

Aleixo. Monica has terrible taste in men. Aleixo’s drawn a line, and when her current man crosses it, Aleixo will break all the rules to save her from herself.

Dominguez. A single night of passion with Amara, or a lifetime of love? How is a demon to choose?

Aires. He’s falling in love with Della. But what happens when two sexy as sin demons want you body and soul — and aren’t into sharing?

I stood in the realm between hell and Earth, watching and waiting. I could feel Amara’s panic, but she didn’t seem to be in any harm at the moment. A paddle lay nearby and her ass was a rosy pink, so I assumed her lovers had used it on her already. I was rather surprised she’d allowed it. After being her guardian for the past seven years, I knew her preferences, and BDSM just wasn’t one of them. Neither was a menage a trois, for that matter. And yet here she was, a collar around her neck, the chain in one of her lovers’ hands. The other man stood in front of her with his cock aimed at her luscious lips. I’d fantasized once or twice about that mouth myself.

She shook her head and tried to back up, but the other man crowded her.

“Be a good slave and suck his cock,” he ordered.

I narrowed my eyes. I knew it was part of the game, but I didn’t like his tone.

She shook her head again and leaned away from the man once more. The one who seemed to be in charge jerked at the chain and hissed at her.

“You’ll do what you’re told. You’ll suck his cock and take my dick in your ass at the same time, and you’ll like it.”

I could see the fear in her eyes and knew things had gone on long enough. What may have started as innocent fun was turning into something sinister. Stepping out of the shadows, I made my presence known. It was one thing to play, but what they had in mind was something else entirely. I moved directly into their line of sight and watched as first one paled, and then the other. My blue skin and black tattoos marked me as a demon, and they recognized that fact. But if there had been any doubt, my nearly black eyes and the small horns jutting from my forehead would’ve sealed the deal.

The chain dropped to the floor and Amara crawled to my side, wrapping her arms around my leg. I might be a demon, but she knew who her savior was in this instance. She made a rather pretty picture sitting at my feet with that collar around her throat. But I doubted it was an image I’d ever see again.

“I do believe she told you no,” I advised the men. “You do know what that word means, don’t you?”

“She agreed to come here with us. She knew what she was getting into,” the first one said, trying to sound braver than he was as he stood there quaking in terror.

“Obviously things were going further than she wanted. The next time a woman tells you no, you’d better listen. And don’t even think of looking at Amara again. Don’t come near her, or think about her. Is that clear?”

They both nodded adamantly.

Gathering Amara in my arms, I blinked us out of there and back to her apartment. Setting her on her feet, I ushered her into the bathroom. After starting the shower, I unfastened the collar from around her neck and tossed it in the trash. Holding out a hand, I waited until she took it.

“You need to wash their scent from your body. It will make you feel better,” I told her.

She placed a shaky hand in mine and let me assist her into the shower. I watched as she reached for the bar of soap and promptly dropped it. Falling to her knees, she tried to grab it again, but ended up letting out a sob and burying her face in her hands.

With a sigh, I disrobed and climbed in the shower with her.

Kneeling in front of her, I gently pulled her into my arms. I was a little surprised when she came willingly. I’d expected her to stiffen up or at least fight me a little, what with me being naked and all, but she seemed to trust me. I hoped I didn’t betray that trust. My hard cock was begging to find a home inside her sweet warmth, but I was doing my best to control the monster.

I tried to read her thoughts, but they were chaotic and I couldn’t quite grasp them. She was obviously still shaken from her encounter, and her mind, as well as her body, was in turmoil. There was nothing for me to do except calm and soothe her the best I could.

“I’m your guardian. I always know when you’re in trouble.”

“I don’t care if you’re a purple alien. You rescued me. I can only imagine what would’ve happened to me if you hadn’t come along when you did. They would’ve forced me, I’m sure. I was stupid to go with them, but it seemed like harmless fun. They didn’t seem like men who would hurt me.”

“You should never enter into something like that unless you know the person and trust them. You could’ve been seriously hurt tonight.”

She shuddered in my arms.

“Let’s get you cleaned up.” I picked up the soap and placed it in her hand.

She swiped the soap down her arms in jerky movements, missing more of her skin than not. Taking the bar from her, I lathered my hands and soaped her skin, using slow, easy motions. I didn’t want to scare her. When I reached her breasts, I wasn’t sure what to do. In a normal situation, I wouldn’t hesitate, but this was far from normal.

Amara took my hands in hers and guided them over her breasts and down the valley between them. As my palms slid down her torso to her hips, her gaze flicked up to meet mine. With her eyes steady on mine, she slipped my hand between her legs. Her pussy was bare and oh so soft. I longed to taste it, to feel that smooth skin against my tongue.

Lust hit me, more mine than hers. I felt uncertainty from her, and from what little I could glean from her thoughts, she wanted reassurance that sex wasn’t about violence. I wasn’t sure what to do… give in to my desire or push her away?