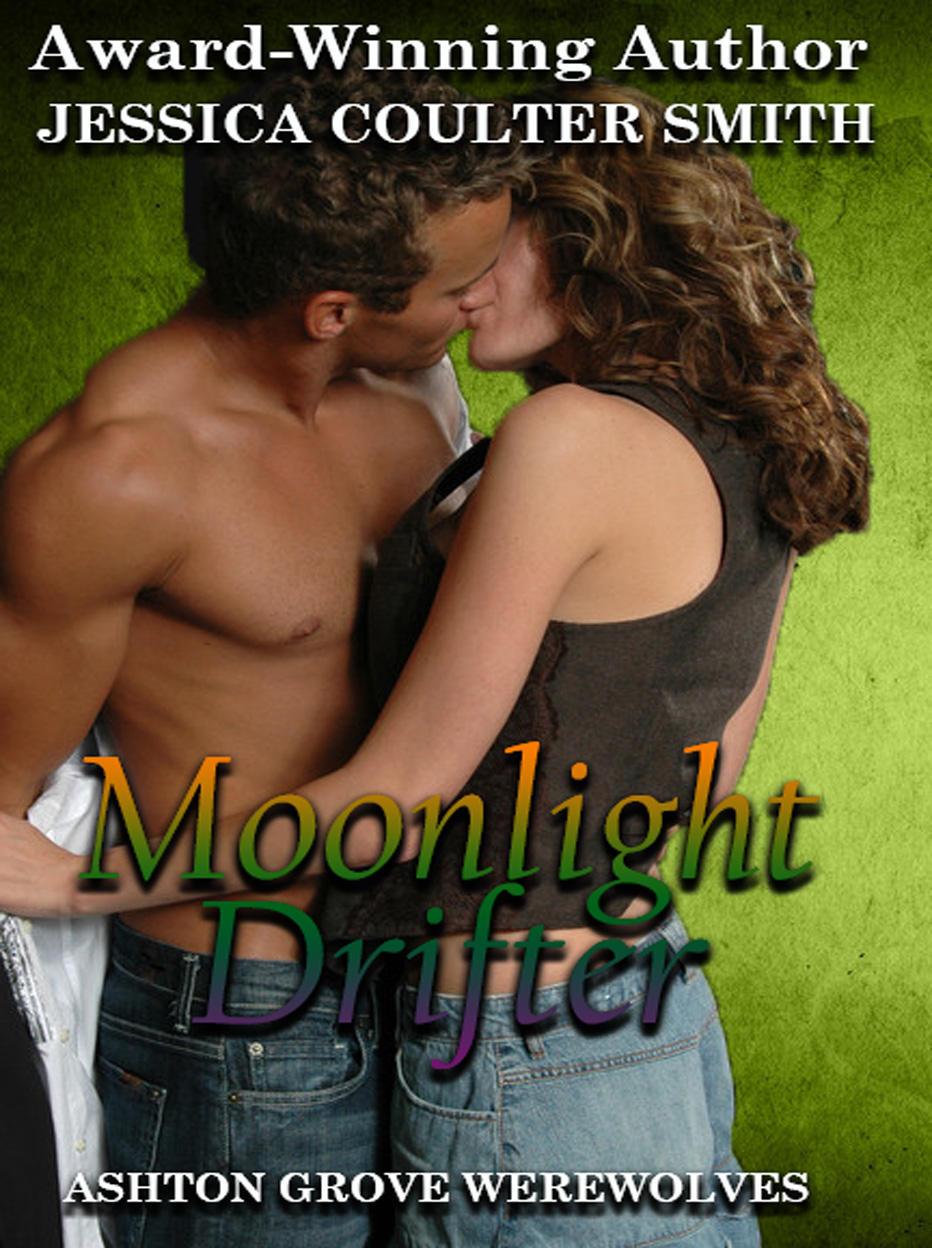 Allie Jenson has drifted from one pack to another, ever since her family died. She thinks she might have finally found a home with the Ashton Grove pack, but her life is not easy. She has a job she hates, and none of the males want her for more than sex – not that she’s giving it up. When were-tiger Cain Boudreaux takes it upon himself to “save” her from a handsy customer, by claiming her in front of their packmates no less, things get a little out of hand. He’s rude, chauvinistic, and totally not her type. Well, maybe he’s not completely not her type. He does have that tall, dark, and sexy thing going on. And that Cajun accent slides across her skin like warm silk. But what in the heck is she going to do with a man who thinks her place is barefoot and in the kitchen?

*This is a novella*

This title was blocked by Scribd and Apple

Allie Jenson swept her bangs out of her face and pulled the dishtowel from her apron. Wiping down the table in front of her, she wondered how much longer she had to be in this God awful place. With a waitressing background, she’d thought it would be easy to get a job at a diner or something, but no one in Ashton Grove had been hiring. So here she stood, in a micro-mini skirt and a skintight shirt, getting her ass pinched every few minutes. She supposed it could be worse. She could be working across town in the strip joint. If Lagoona Paradise hadn’t hired her, that was going to be her next stop. She wasn’t too proud to admit that maybe she’d made a mistake coming to Ashton Grove. First demons and now demeaning jobs. If she didn’t hold out hope that her mate was in the pack, she’d hit the road and search for a new place to call home.

But then, that’s how she’d landed in Ashton Grove. She’d been bouncing from pack to pack all across the US, never finding a place that quite felt like home. The Ashton Grove pack was different from what she was used to, and it wasn’t just the two alphas. The people were friendlier and there were lots of pack gatherings. From what she’d heard, before the word demon was ever mentioned, there had been a lot of good times to be had in the pack. She wished they could go back to those days. Now they were down to one alpha while Gabriel locked himself away to mourn the loss of his mate and child.

Allie didn’t begrudge him his time alone, even understood it having lost family herself, but the pack needed him. Surely he realized that! He had a garage to run, for starters. She’d heard that Michael had taken over until Gabriel rejoined the land of the living, but something needed to give pretty soon. Word was out that Kinley, the sugar glider shifter who had just mated an angel, had been visiting Gabriel daily. At first, Allie had thought it was good news, that maybe their alpha was coming around, but that had been weeks ago and still nothing new happened. Gabriel was still acting like a hermit, with the exception of Kinley and Adriel visiting him.

Allie went up to the bar to pick up an order for table three, steeling herself for the touches and pats from the men sitting there. She’d accidently used her werewolf strength the first night she’d worked at Lagoona’s and nearly broken a customer’s hand. Ever since, she’d just gritted her teeth and put up with the grabby assholes sitting in her section. There were a few good men who came to see her, regulars who treated her civilly. Unfortunately, none of them were in sight tonight. She glanced across the room at Hunter’s table and wished her pack had come to sit in her section, but she understood why he hadn’t. She’d seen him watching Holly, one of the other waitresses, and knew he’d chosen the table with the best view for his favorite pastime.

As she set the first bottle of beer down at table three, the big human with the mustache reached over and patted her on her ass. She ground her teeth together to keep from snapping at him, and calmly set the other bottles down in front of the other three men.

“Can I get you gentlemen anything else?” she asked, trying to keep her voice sweet and light.

“Just you, honey.” The one with the mustache leered at her.

“Aww, come on. We just want to have a little fun. We’d treat you right,” he said.

A shiver raked down her spine. They wanted to share her? All four of them? She hoped her face didn’t show her distaste. She took a step back, getting out of grabbing range, told them once more that she wasn’t interested, and then walked away, head held high. She heard them calling out to her, but she didn’t stop, didn’t look back. When she reached the bar, she set her tray down and sighed in relief. She’d thought for a moment that things would get ugly.

She might not love this job, but she needed it. The pack owned the apartments where she lived, but there was still rent to pay. A nominal amount compared to what she’d be paying elsewhere, but there were also utilities and cable. Not to mention car insurance and gas to put in her car, and with the way gas prices had been climbing, that wasn’t cheap. If it weren’t for all of her moving around, she’d wish she had a smaller vehicle. The large SUV came in handy when it came time to load up her boxes though. She hoped her days of moving around were over, she really did, but there were days when she wondered if she’d made the right decision. More than once she’d contemplated hitting the road and seeing where life would take her, what adventure would next be on her list of things to do.

What she needed was a man who would be her all-time adventure, a man worth settling down with, but she was starting to wonder if that would happen. She’d dated a few guys in the pack, but she hadn’t felt that pull that she’d always heard about. They’d been nice, and the dates had been pleasant, but other than that initial amount of lust, there’d been no spark. So she’d passed on a second date and had moved on. She’d heard rumblings that she was a tease because she wouldn’t invite her dates inside at the end of the night. It was no secret they wanted more from her than she was willing to give, but she’d made a vow when she was a kid and she’d kept it so far. No man was getting between her legs, unless he was her mate. She hadn’t led a pristine life, had even been caught stealing once or twice, but it was the one gift she could give her mate. The knowledge that no one had come before him. She would belong to him and only him.

Out of the corner of her eye, she saw two males settle in her section. She adjusted her ponytail, brushed her bangs aside once more, and went to greet her new customers. It was with a great deal of relief that she noticed it was two pack members, Cain Boudreaux and Sawyer Braxton. She knew they worked together at Connor’s construction company, and usually Rex McKinnon was with them. They’d sat in her section a few times, but usually preferred one of the tables near the wall in the back. She supposed it was so they could survey the whole room.

“Bring a pitcher of whatever’s popular tonight,” Sawyer said. “Rex should be joining us soon. I think he was going to see if Adriel wanted a night out. He stays glued to Kinley so we try to get him out every now and then for some time with the guys.”

Allie frowned. “So, because he loves his mate and wants to spend time with her, he’s whipped? I feel sorry for your mate, Boudreaux. Women like to feel wanted, needed, as if they’re the most important thing in your life. Seems like Adriel already figured that out.”

Cain shook his head. “Not gonna happen. No woman is gonna grab this tiger by the tail and lead me around by my whiskers. My mate is going to know she’s important, but she’s also going to know her place.”

Allie’s eyebrows arched. “Her place? As in what, barefoot in the kitchen?”

He shrugged. “I make a comfortable living. No sense in my woman working if she doesn’t have to.”

“Need I remind you that every mated woman in this pack works? Marin works with Cole at Sabin Bio-Med, Chloe works with Matt in real estate, Aislinn helps Connor with his office work, Kendall works from home but she does have a job. Even Kiera… she helped Gabriel with office stuff when he needed her to. Her main job was helping take care of the pack though.”

“You forgot Harper.” Cain said with a grin.

“Harper decided to be a stay-at-home mom,” Allie conceded. “But you’d better believe Ramsey would let her work if that’s what she decided she wanted to do. I can’t see him ordering her to stay home and clean house every day.”

Cain held up his hands in surrender. “Okay, okay. You’ve made your point, cher.”

“Don’t you ‘cher’ me you overgrown Cajun carpet.” Sawyer snickered and she narrowed her eyes at him.

“I can’t wait to meet your mate,” Sawyer said. “He’d better have a sharp wit and a strong will. Otherwise, you’re going to run right over him.”

Allie rolled her eyes and strolled off to place their order. Sawyer was nice, but if he were her mate, she’d probably run screaming into the night. He thought he was God’s gift to women, but thankfully he hadn’t hit her on her. And then there was Cain. The stoic were-tiger, who was apparently something of a chauvinist. She couldn’t believe him! Her place, indeed. She hoped he mated a lioness, a woman who would beat him over the head with a skillet for even suggesting her place was in the kitchen. If anyone deserved to be henpecked by their mate, it was Cain.