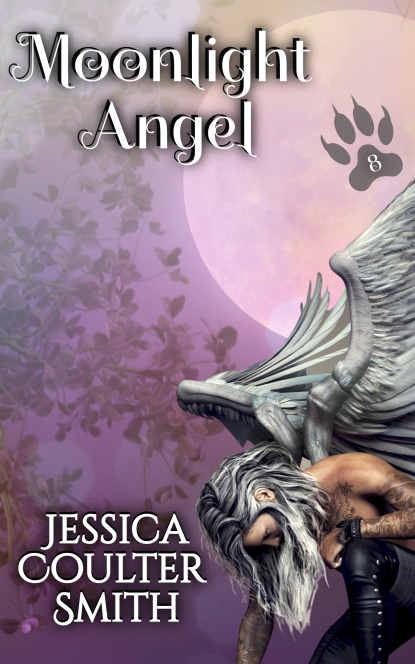 The angel Adriel has faced hard decisions before, but deciding to give up his wings for the smallest shifter in the Ashton Grove pack was a no-brainer. All right, so maybe he shouldn’t have rushed things. Maybe he should have waited until they actually met, but after keeping tabs on her from Heaven for the past month, he knows she’s exactly what he wants.

Kinley Taylor, Aussie transplant and only sugar glider in the Ashton Grove pack, decided long ago she didn’t believe in mates. Well, not for her anyway. People are pairing up all around her, falling in love, binding themselves to one another, but she’s holding out for something more. No ordinary wolf or shifter is going to hold her attention, of that she’s certain. Imagine her confusion when she’s attracted to someone new in town – and he’s human! What would her dearly departed parents think of such a match?

Adriel is determined to show Kinley that he’s everything she’s ever wanted, and more than she’ll ever need. If he can’t persuade her with words, he’ll just have to keep his mouth occupied with other delights – like kissing her senseless.

*NOTE: If you read this before reading Moonlight Warrior, you’re going to be very confused. This is a novella.

Adriel stood before the Archangel Gabriel, hoping he wasn’t making a huge mistake. In his heart, it was the right thing to do, but so many things could easily go wrong with his plan. His fellow angels couldn’t believe what he was going to do, had in fact tried to talk him out of it, but Adriel wouldn’t be swayed.

He’d seen her once, across the battlefield during the demon war in Ashton Grove. The moment he’d laid eyes on her, something inside of him had shifted, warmed, and he’d felt a certain rightness as he gazed upon her. She’d fought valiantly, attacking the demons who chose to pick on her for petite size with gusto, her long blonde hair cascading down her back in a ponytail that whipped around with her movement.

Fighting the demons that came his way, he’d kept an eye on her, making sure no one dealt a deadly blow. When he saw two other packmates join her, he was relieved. The three women worked together, protecting themselves, hacking and slashing at anything that came their way. When the last demon fell, and all that could be heard were the painful moans and cries of the injured, Adriel’s gaze had sought her out once more, grateful she seemed to be okay.

He’d wanted to walk up to her, introduce himself, maybe even touch her sun-kissed skin that looked silky smooth. But he’d felt the pull of Heaven and knew that his time on Earth was at an end. With a heavy heart, he’d ascended into the Heavens, taking his place beside his brothers and sisters once more, left with nothing to do but observe those down below.

Gabriel cleared his throat, bringing him back from his memories, his cheeks warming in embarrassment. One did not wander off, mentally or otherwise, when facing one of the archangels. They were God’s generals and oversaw the running of Heaven.

“Are you sure about this, Adriel? There’s no coming back from this.” Gabriel’s blue gaze drilled into him.

“You would give it all up, for a human you don’t even know? What if she turns you away? Did you stop to think that maybe you aren’t her destined mate? Perhaps there’s a shifter out there, maybe even a wolf in the pack, who has been biding his  time to claim her.”

He felt a growl rumble out of him before he could think better of it. “No one will touch her! Kinley is mine!”

“If you go through with this,” Gabriel said, “your only way back into Heaven is to live a life without sin. I can read your thoughts, Adriel. You’ve already sinned over and over in your mind. If you do this, you may never see Heaven again. Are you willing to take that chance?”

He stiffened his spine, lifted his chin, and stared Gabriel right in the eyes. “Yes. I’d rather have one lifetime with Kinley, than an eternity without her.”

Adriel held still as Gabriel reached out and placed his fingers against his forehead. There was a warmth that suffused him from head to toe; then, the world tilted. Heaven fell away, and Adriel was free-falling to Earth, his wish having been granted. Pointing his feet toward the ground, he landed with a thud that vibrated through his whole body. There was a slight indention in the ground as he moved toward the road in front of him.

To the left, lay an open two-lane highway with nothing but trees and hills. To the right, the most beautiful thing he’d seen yet today–Welcome to Ashton Grove. He smiled at the sign and began walking toward town. Now that he was here, he didn’t have a plan. He couldn’t very well walk up to Kinley, declare himself her mate, and cart her off to the nearest bedroom, much as he’d love to. It just didn’t work that way.

As he meandered the streets of Ashton Grove, he found himself on the doorstep of none other than Colin Tierney. He shouldn’t be surprised, really. He’d gotten to know Colin rather well when they prepared for the war. Maybe the wolf would have some idea as to what he should do. Adriel had nothing – no clothes, no money, no job. Heck, he didn’t even know where he was going to sleep tonight. Perhaps this hadn’t been the best laid out plan ever, but he was here now, and he wasn’t leaving anytime soon. Not unless the pack forbade him from seeing Kinley. He hadn’t thought of that before.

He rang the bell and waited patiently. When the door opened, a tousled Colin answered, and he winced, realizing he’d probably interrupted a rather delicate time for the couple. It was nightfall, after all.

“Adriel,” Colin asked, his brow furrowed, “What are you doing here?”

“I’m not exactly certain. I just started walking, and this is where my feet led me.”

“A lot has changed since  we last saw one another.”

Colin shoved the door open further. “I think you should come in. Kendall will be happy to see you.”

Adriel wiped his feet on the mat and brushed past the wolf. The last time he’d been in their home, it hadn’t been under the best of circumstances. Now, he took the time to look around, taking in his surroundings. The furnishings were comfortable; their home, inviting. He could see Kendall’s subtle touches here and there, in a vase of flowers or set of knick knacks–things only a woman would think to add.

Adriel obligingly made himself comfortable on the sofa, . He was starting to wonder how he was going to pull this off. When he’d asked to be made human, he hadn’t thought about his daily needs. Having been created an angel, he’d never had to eat or drink, never had to worry about a roof over his head, or a change of clothes. What could one of God’s soldiers possibly do here on Earth? He no longer had any of his heavenly powers or connections. He was human, with all that that entailed.

Kendall stepped into the room, giving him a warm, welcoming smile.

He rose and gave her a hug. “It’s good to see you, too. I’m sorry to just show up on your doorstep like this, uninvited and unannounced.”

“You’re always welcome in our home,” she responded.

“What brings you back to Ashton Grove?” Colin asked. “There aren’t more demons coming, are there?”

“No. Nothing like that. At least, not that I know of.”

Colin laughed. “And here I thought you knew everything.”

Adriel rubbed the back of his neck. “Not anymore. I’ve sort of been expelled from Heaven.”

Kendall’s eyes widened. “Expelled? But… what did you do?”

“I asked to be made human, so I could be with someone special.”

Colin smiled broadly. “You’re in love? How splendid! Who’s the lucky lady? Anyone we know?”

“Yes. Well… about that. She doesn’t know me, has never met me. Not officially, anyway. I’m sure she knows of me, but…” He sighed. “I’m in love with a woman who doesn’t know I exist.”

“You gave up Heaven for someone you don’t even know?” Kendall asked. “Adriel, how could you do such a thing? What happens if she never returns your love?”

“Then, I’ll have given it all up for nothing,” he said softly. “But I have to try. The moment I saw her, I knew she was special, that I wanted to be with her. Angels have been left to roam the world for far less than falling in love. At least I had a good reason to become human.”

“We’ll help you in any way we can. Is it someone we know?” Colin asked.

“She’s part of your pack,” Adriel admitted. “I watched over her during the battle.”

Colin and Kendall shared a look.

“Few of our females are still here, Adriel. Some fell during the war, others left looking for a more peaceful pack. Are you sure she’s still here?”

“I’ve watched over her this past month. She’s here.”

“Who is it?” Kendall asked.

Kendall nodded her head. “I can picture the two of you together. I think you’d be good for her. She’s fairly quiet at pack meetings, but one on one, she can be quite the chatterbox. She has that cute Aussie accent too.”

“First things first,” Colin said. “You’re going to need a place to stay. With the pack losing several males, there are a few places that are open, and even furnished if you don’t mind someone else’s leftover belongings. .”

Adriel shook his head. “I can’t take a handout from the pack; it wouldn’t be right.”

“I think my brother and Gabriel would agree with me. We owe you for what you and your brothers did for us that day. Without you, the entire pack would have been wiped out. Let us help you, at least, accept the essentials you’ll need to get started on your human life.”

“Colin’s right, Adriel. You’re more than welcome to stay here with us, until you get situated, but you should let the pack help you. Let us repay you for your assistance with the demons.”

He mulled it over for a moment. “Payment for services rendered?”

“I suppose I can accept that,” Adriel said.

“It will take a day or two to get the power turned back on, gather some clothing for you, make sure you have groceries…you’ll stay with us until everything is in place,” Colin said. “I’ll go call Connor now and let him know what’s going on. I’m sure he’ll be more than happy to welcome you into the pack.”

Adriel felt his heart warm by  their generosity. When he’d arrived on Colin’s doorstep, he had no idea the wolf would be such a help. It went against everything Adriel believed in to accept a handout, but this was more than that. It was a hand up, a way to enter the pack, and have the opportunity to speak with his future mate. If they were willing to help him win Kinley’s heart, then, he would accept. Something told him he’d need all the help he could get.