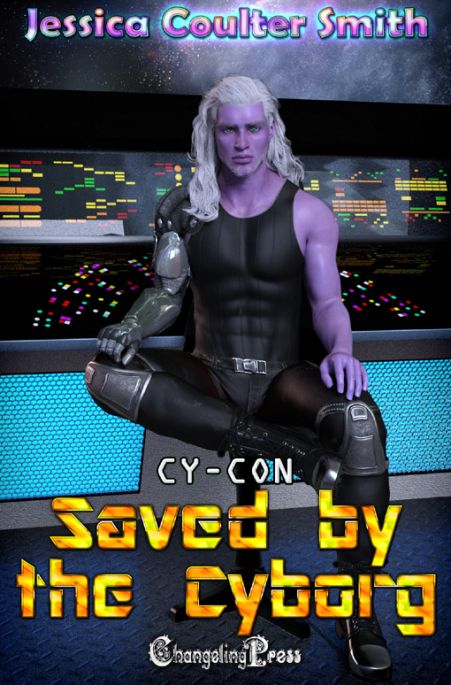 Intimidating. Damaged. Unlovable.
Tark wanted a mate even before he joined the Cy-Con program. His sheer size made females fear him, and now that he’s been turned into a cybernetic freak they avoid him even more. When he finds a female being held in a brothel against her will, he knows that he can’t leave without her.

Tark means to take Suki home to his world, a place where she can heal and start a new life. He never realized she’d want to start that life with him, or that she’d insist on leaving the safety of Xpashta in an effort to rescue others like herself.

Brave. Fearless. Pregnant?
Tark saved the alluring human female once. When she’s captured during a dangerous mission, he knows he’ll have to do it again, and this time, he’s not letting her out of his sight — especially when he finds out she’s pregnant with his child.

Tark didn’t hesitate to leave the premises. He knew the med clinic would properly dispose of Yoko’s body. She hadn’t deserved a fate like this, no one did, but there was little he could do about it. Except find the Suki she mentioned.

Was Suki another female at the brothel? He retraced his steps through the trading post and stopped outside the brothel. Were all the females as badly cared for as Yoko had been? Were they all dying? He didn’t know if he could handle seeing a tent full of females without killing the slaver responsible for their care. Not when the males on his world would give anything to have them as mates, would treat them as if they were the most precious things in all the galaxies. It didn’t matter if they’d been whores. A cyborg would never look down on a female for any reason except treachery.

He pushed open the door covering and stepped inside. The slaver slithered his way, greed burning in his eyes as he scanned Tark. A Kronkite, he was reptilian in appearance and small in stature. Breakable, in Tark’s opinion. Before the creature could reach him, he scanned his surroundings. Several females of various races were servicing customers out in the open. None seemed to be in distress, and none were human. He checked the interior again, looking for a female similar to Yoko. The slaver moved closer and Tark eyed him, having no idea how he kept the slaves in line with such a weak appearance.

Then again… Tark looked around once more. The females who weren’t servicing customers were lounging on cots, most staring at the roof of the structure. The few whose eyes he could see had a blank stare, as if they weren’t present.

Drugged. It was the only explanation. Or perhaps so badly beaten that they had no fight left in them. Even those currently in service didn’t appear aware of their surroundings.

“I have females available. How many do you wish? A male of your size could easily handle two or three, I would think,” the slaver said.

The slaver got a gleam in his eye. “That one is special. One such as you would likely break her. Her services are reserved for those of a higher rank. Princes. Ministers. Kings.”

Tark took a step toward the slaver, then another, until he saw a flash of fear in the male’s eyes. The slaver backed up, and for every step he took, Tark took another. Soon, the disgusting male was pressed against a wall and had nowhere left to go. His skin camouflaged until he matched the color of the structure, but Tark could still see him clearly.

The slaver waved a trembling hand toward the back of the porta-dome. Tark growled at him and the scent of piss filled the air as the slaver soiled himself. The cyborg smirked as he made his way to the back, scanning the females for a human.

In the corner, her knees drawn up to the chest, he finally found her. Her long, dark hair was matted and there were bruises on her arms and thighs, as if she’d been forcefully held down. Rage filled him at the sight and he turned to face the slaver again. The male had enough sense to put a lot of space between them.

“You want her? No charge. Use her all night,” the slaver said, his voice quivering. “You tell your friends that Porie is the best in the business and offers many beautiful females.”

“Mine,” Tark said, his voice deeper than before as he snarled at the slaver. “Mine to keep.”

The slaver narrowed his eyes and shook his head. “Too valuable.”

The Kronkite flexed his fingers and claws popped out. They appeared harmless and he laughed at the creature, but it had only been a distraction. Energy bolts hit the center of his chest and he glared at the shiny weapon in the Kronkite’s hand. Tark advanced on him, receiving three more blasts, but the little reptile had miscalculated. Tark was no longer just Zelranian. He was cyborg, and the energy blasts only served to increase the power to the receptors in his brain.

Tark lashed out, his fist slamming into the Kronkite’s jaw. The creature flew half the distance of the dome and landed in a tangle of limbs. One foot was bent at an awkward angle, but Tark didn’t care. He advanced on the slaver, landing blow after blow, almost hoping he killed the nasty being.

The male began dragging himself backward, looking around as if seeking help, but none of his customers were paying him any attention. Panic blazed in his eyes as he moved even further away. The stench coming off him suggested he’d done more than just piss himself. Weakling.

“Whatever you wish,” the slaver said. “There are other females, if you’d prefer someone more exotic?”

“Her,” Tark said, pointing at Suki. “And only her. You will never touch her again, and neither will anyone else.”

Suki trembled as Tark lifted her into his arms. Her eyes were dark, filled with terror, and he wished that he could soothe her, but this wasn’t the place or the time. For whatever reason, she didn’t appear to be drugged like the others. He needed to get her far from here.