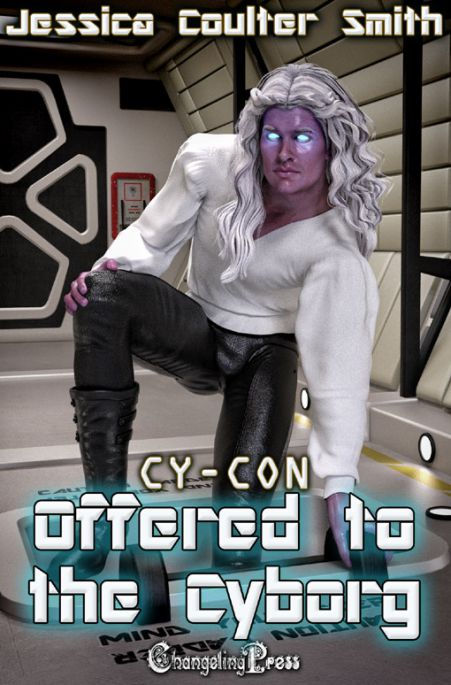 When the Zelranian cyborg’s ship The Sphinx is attacked by a reptilian race called the Meori, Wrylack is the only cyborg left standing. Forced onto the Meori vessel, his skills as a medic are demanded in exchange for his life. But any plans Wrylack may have had to escape died the moment he laid eyes on Shaylee, the human female slave in the Meori med bay. Even injured, she’s the most beautiful thing he’s ever seen. And when the Meori realize they can use her to control Wrylack, they are only too pleased to give her to him.

Shaylee has only known pain and suffering all her life. First on Earth, passed around the foster care system, and later as a slave to one alien after another. No one has ever touched her with kindness, has ever cared what happened to her. When the sexy purple cyborg with the strange eyes and gentle touch says she’s his, Shaylee is almost scared to hope that her life is changing. But the big male isn’t interested in owning her as a slave. He wants a mate!

Nominated for Book of the Month (January 2019) at Long & Short Reviews!

A blast rocked The Sphinx, making the floor tilt under Wrylack’s feet and sending him careening into a wall. Two Meori ships had cornered them. One was firing while the other had docked. Locked in the med bay, Wrylack cursed the captain for giving him orders to stay put. He might be a medic, but he was a damn good fighter too. As it was, he was stuck in medical with no weapons. According to the onboard computer, there were now thirty lifeforms aboard The Sphinx instead of their crew of ten. Wrylack understood that the captain wanted him safe, so he could heal any who were injured, but this was ridiculous. He should be out there kicking ass with everyone else.

Behind his sealed door, he could hear the sounds of fighting down the corridor and knew it was drawing closer. A scream of pain echoed down the hall, and he hoped it wasn’t one of his brothers. If the Meori had gotten near medical, which was in the heart of the ship, it must mean his fellow cyborgs were having a hard time fighting them off. Had there been casualties? He didn’t want to link to anyone and put them in danger.

His hands clenched at his sides as he scanned the room for anything he might use as a weapon. There was an old-fashioned scalpel he still used on occasion, but it wouldn’t do much against laser weapons or ion blasters. His hand closed around the scalpel and he held it at his side, hoping that his crew would be all right. He’d unsuccessfully tried to open the medical doors three times, wanting to help the others, but the captain had recoded it so that the portal would only open from the outside. That would only keep Wrylack safe if the cyborgs won the battle, but his captain apparently hadn’t thought of that.

Wrylack tried to connect to the system with his neural transmitters, but access was locked. He had to admit the captain was smart and had thought of everything, even if he was foolish enough to leave Wrylack out of the fight. He’d trained alongside the others on Zelran and could fight as well as anyone. If anything, his cybernetic eyes, an anomaly even amongst his kind, would give him an edge in fighting. He could see the weak points on any opponent, including internal ones. Frustrated, he slammed his fist against the wall, denting the metal of the ship.

The ship grew quiet, and Wrylack tried to communicate with his fellow cyborgs, but no one was responding. He feared they’d all been killed, which meant the Meori would come for him next, once they realized he was on board. He could hear the clang of boots coming down the corridor and braced himself. When the doors to the med bay slid open, he stared at the green and gold aliens, with their serpent-like eyes and tongues.

They looked him over, laughing when they saw the scalpel clutched in his hand. Two held ion blasters pointed at him, and he knew there was no way he was taking them out. Not on his own and only armed with the scalpel.

The three Meori in front hardly had a scratch on them, but the ones in back were pooling blood on the floor. Wrylack tried not to smile at the sight. It seemed his brothers had fought hard, even if they hadn’t been victorious. Would they kill him now too?

“The healer thinks to fight us,” the larger one up front said.

Little did they know he could kick their asses, if it weren’t for the unfair advantage of the blasters in their hands. He might be enhanced, but he wasn’t indestructible. Going into a blaster fight with nothing more than a scalpel would get him killed.

The alien shrugged. “Alive, but incapacitated.”

Why hadn’t they killed everyone? What was it they wanted?

“And your plan for us?” Wrylack asked.

The alien smiled, his pointed teeth showing. “The others will be dropped at Alpha9, for a fee of course, and we’re commandeering this ship. You, however… ” The alien looked him over again. “We need a medic. Ours died and since your cyborg brothers did some damage, my crew will need to be tended. Serve us well and you will be rewarded.”

Wrylack could read between the lines. Service would be required regardless, if he wanted to live. He would imagine the reward would be his freedom. What they didn’t know was that the moment he’d laid eyes on them, he’d hacked into the telecommunications system and had the computer send a message to the commanders on Xpashta, with their present location and information on who had taken command of the ship. It wouldn’t be long before the cyborgs’ other ships were on their way to lend aid. He only hoped it wouldn’t be too late.

One of the Meori gripped his arm tight, making the nerves in his arm go numb, and the scalpel fell from his hand, clattering to the floor. Wrylack allowed himself to be dragged through the ship and taken aboard the Meori vessel. He wasn’t stupid enough to think he could take on two ships himself, which meant he had to follow orders and stay alive until backup arrived. The ship was much larger than The Sphinx and had probably once been a luxury liner, judging by the artwork on the walls and the dense carpet under his feet. Slave females of all races shuffled down the hallways and gathered in open rooms. Some were dressed in transparent tunics, and he knew they were breeding stock. The thought made him ill.

When they reached medical, Wrylack was shoved inside, and he froze at the sight before him. Two human females lay dead, the sheets covering them stained with blood, with a third huddled in the corner, her eyes wide in fright. Blood dripped down her arm, and her clothes were torn. Anger welled inside him, and he turned to snarl at the Meori who had dragged him on board.

The Meori shrugged. “When we purchased them, we didn’t realize they wouldn’t be sexually compatible. Their master was raving about how good it felt to fuck them. We stopped a male from mounting the third when the first two died.”

Wrylack was horrified and sickened. Moving slowly, he approached the female in the corner. He knelt in front of her and used his cybernetic eyes to scan her. Aside from some bruising and the bite mark on her shoulder, she seemed to be healthy. All of her organs were in good working order, and he was thankful to note she wasn’t pregnant. Judging by the scarring in her womb, even if the Meori hadn’t been able to breed with her, someone had been successful at some point. The haunted look in her eyes spoke of someone who had lived this life for a while. His heart ached for her, imagining the horrors she’d probably faced as a slave.

Wrylack pulled aside her slave tunic and studied the bite. It was deep and the tissue around it was badly bruised. The Meori who had tried to mount her had likely bitten her to hold her in place. Wrylack hoped she’d fought like hell. No one deserved the fate of being a breeder, especially to the Meori. He stood quickly and rummaged through the cabinets until he found what he needed. With a tube of livron gel in his hand, he sank to his haunches in front of her again. Wrylack squeezed the gel onto his fingers and spread it over her wound. She flinched at his touch, but didn’t lash out at him. He knew the gel would cool the angry wound first, then numb it within minutes. If applied regularly, the wound would seal in a few days.