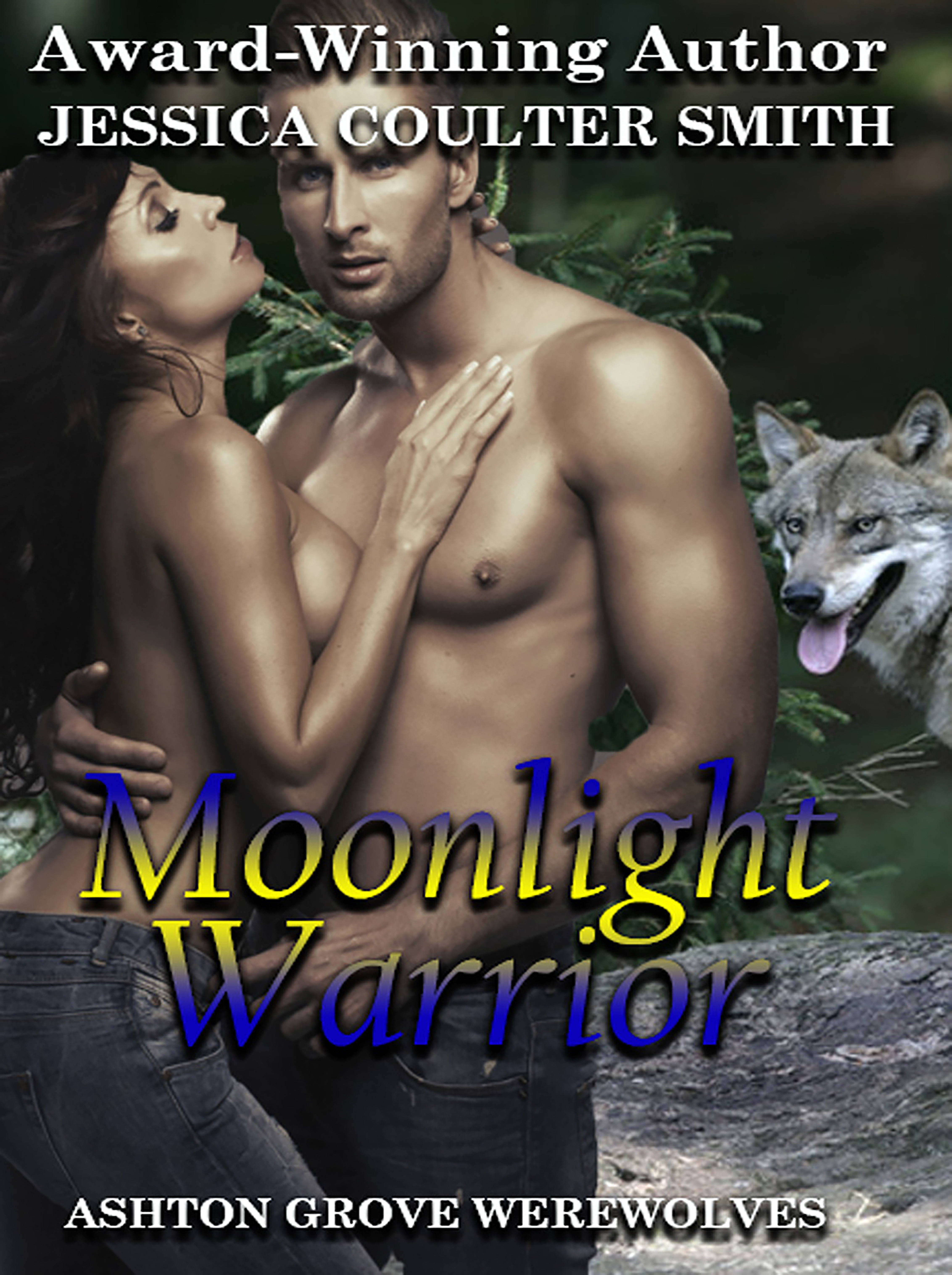 The Ashton Grove pack has been on the verge of war for months, and now the time has arrived. The Skulls of Hell are on their way to the small sleepy Georgia town with destruction on their minds. But a new voice in the pack wants to know why.

Kendall Wright has lost one battle with the Skulls already and she isn’t anxious to face them again, but as Colin’s mate she knows it’s her place to fight by his side. But if she’s going to forfeit her life for the good of the pack, she wants to know why.

Colin has to admit his mate brings up a good point. Why travel such a great distance to wipe out a small pack of werewolves? There’s nothing special about the Ashton Grove pack, or is there? Can the mystery be solved before the war begins?

Kendall leaned against her car and tried to get a signal on her phone. She was stranded in the middle of nowhere with no way to contact anyone. Her car had died and refused to start again. She fought the urge to smack her phone against the car. Not only did she not have any reception, her 4G was out as well. Not that the internet did her much good, but at least she could’ve emailed her friend and hoped he got the message. If it hadn’t been daylight, she would’ve just shifted and found the nearest town. Then again, she’d be naked when she shifted back so maybe that wasn’t such a great idea.

Just when she was giving up hope, she heard a loud engine. Shading her eyes from the sun, she smiled when she saw a large truck rumbling her way. With any luck, the owner would be a guy. A guy knowledgeable about cars, she amended. Maybe she’d be on her way in no time!

The truck pulled over to the side of the road just behind her car. But as the doors opened, she realized her mistake. She should’ve waited for them inside her car. Now she was in the open and exposed. She watched as five of the hardest looking men she’d ever seen got out of the vehicle. Despite the hot June weather, three of them wore black leather jackets. She had a really horrible feeling about this.

The way they moved told her they were something other than human, but she wasn’t sure exactly what they could be. They didn’t smell like shifters. There was a foul, almost rancid, smell coming from them and it made her want to gag. She edged closer to the driver side door of her car, wondering if she could make it in time, but one look at the approaching men put a nix on that idea. They were too close and she had a feeling they were faster than they looked.

They circled her, penning her in, making her feel like a trapped animal. Her other half, her animal half, yowled in protest. She could shift, but that would only make her more vulnerable. Sure, she’d get in a few good licks, but her cat was small and they would overtake her quickly. There was little doubt in her mind that the more she fought them, the more pain they would inflict. Now that they were closer, she could see the evil lurking in their coal black eyes. There was only one type of being with eyes like that – a demon. The skull and crossbones on the front of the leather jackets gave her a clue as to who she was dealing with.

Fear snaked through her, seizing her. They tightened their circle, closing in until they were near enough to touch her. Her brain was telling her to flee, but her body was locked in place. A tremor ran down her spine, shaking her from head to toe as the leader reached out to touch her, running his fingers through her spiky red hair. Another ground against her from behind and she nearly wet herself. What were they going to do to her? Would she survive?

“Tie her up,” the leader commanded.

The demon behind her grabbed her hands, jerking them behind her back. Another produced a length of rope and tied them together, nearly cutting off her circulation. Next, they tied her feet and she was slung over someone’s shoulder and carried to the truck. Dumped in the bed of the truck, one of the demons launched himself into the back, presumably to keep an eye on her. As if she could escape like this! Bound as she was, it would be impossible for her to shift. Had they tied her on purpose, perhaps knowing she was a shapeshifter?

She stayed silent, not voicing the multitude of questions she had, doubting that she would receive any answers and would most likely be punished for daring to speak. Her heart raced as the worst possible scenarios tumbled through her mind, one following the other in rapid succession. They hadn’t gagged her, which meant they didn’t care if she screamed, perhaps even wanted her to. She didn’t know a lot about demons, but what little knowledge she did have told her she didn’t have a prayer of escaping. They would torture her, and possibly kill her, but one thing was certain, she would not give up her soul. With there being five of them, chances were, they didn’t even want it. Which meant they’d captured her strictly for torture.

Bile rose in the back of her throat and she forced it down. She didn’t want to show any signs of weakness, no more than she already had. They would try to break her, and if she gave in too soon, if they thought for one moment they’d already accomplished their task, her life would be forfeit. And she wanted to live! Oh how she wanted to live. There was so much she hadn’t done yet, so many places to see, people to meet. There weren’t many who would miss her if she were to disappear. She had one close friend at home, a guy that really fell into the “friends with benefits” category, but there was no love between them. She’d never been in love and the thought saddened her.

She felt the truck bump along and looked up. The sky gave nothing away, but the position of the sun seemed off. Had they gone off-road? She broke out in a sweat at the thought of being taken further into the desert, where no one would hear her, no one would find her. They would be completely isolated, left to do to her whatever they pleased without interference. Not that a mere human could stop them even if they tried. No, maybe it was better this way. At least she would be the only one at their mercy.

After what seemed like hours, but was surely only twenty minutes or so, the truck came to a stop. The demon beside her rose and hefted her over his shoulder. Once more, she was looking at the world upside down, mostly seeing his denim-clad rear. A sight that made her ill. After stepping around a cactus and a small rock formation, she was dropped, her bones rattling as she landed on the hard ground.

Looking around, she resigned herself to her fate. They’d bolted manacles in the rocks, the perfect way to detain their prey, and an assortment of tools lay nearby. The sight of a branding iron made her flinch and she hoped and prayed that she either passed out before they used it, or that her life would cease before then. She didn’t think she could handle the pain of such torture. The other items didn’t look pleasant either, but they didn’t terrify her as much as the thought of her flesh burning, of being marked for all eternity as their plaything.

One of the demons, whom she’d come to call demon 3 in her mind, cut the ropes binding her and dragged her over to the rock. Snapping the manacles in place, he ripped her shirt, dropping the shredded garment to the ground. Cutting her jeans from her body, he gave her a salacious look that made her skin crawl. Left bare except for her skimpy bra and panties, she shivered in anticipation of the atrocities yet to come.

Demon 2 picked up a long whip, the kind she’d always associated with cattle drives and cowboys, and flicked it, making it snap. She flinched, unable to stop the involuntary motion. Demon 4 picked up a large knife that looked like it had been sharpened to within an inch of its life. The others settled in, obviously wanting to observe, and more than likely wait their turn. She didn’t doubt for one minute that this was only the beginning.

The whip sang through the air, the crack making her tense, waiting for the pain to begin. The next flick sent it across her tender stomach, leaving a long red welt in its wake. Kendall clenched her teeth, determined not to utter a single whimper or cry of pain. The whip whistled through the air again, landing across her right breast. She ground her teeth and bit her tongue, each lashing making it harder and harder to keep quiet.

The whip kissed her flesh again and again, harder each time until it drew blood. Demon 4 licked his lips and moved in closer. She knew the real pain was about to begin. The closest she’d ever come to pain was a broken ankle when she was a kid, courtesy of a trip off a trampoline, and a bad cut to her palm when she tried to stop her forward momentum by slamming her hand into a window pane. None of that compared to now. She wasn’t sure anything could have prepared her for this.

The first cut was small, down the inside of her right arm, and made her hiss, despite her intent to remain silent. The demon grinned even bigger, his eyes growing even darker, if such a thing was possible. The blade of the knife caressed her breasts, but didn’t break the skin. He moved down her abdomen and made a vertical cut that stopped just shy of her navel.

Silent screams echoed in her head, making her ears ring. The taste of blood filled her mouth from biting her tongue so hard. The knife moved down her body, sliding over her panties. She broke out in chills just thinking of the damage he could do to her there, but he moved on. Digging the tip of the knife into her upper thigh, he broke the skin and sliced downward, leaving a four-inch gash in her leg.

Unable to stop herself, she whimpered and jerked at the manacles. The demon threw back his head and laughed before tossing the knife aside. She watched as he sat and another rose in his place. The leader brought her worst fears to life. Picking up the branding iron, he plunged the hard metal into an open flame nearby. She watched in absolute terror as the metal turned orange. When the demon was satisfied it was hot enough, he removed it from the fire and approached her, an unholy light in his eyes, his lips twisted in a sneer.

“Not going to make any noise, are you?” he taunted. “We’ll just see about that.”

Placing his meaty hand on her ribs, he held her still as he placed the red-hot iron against the skin of her hip. Kendall did the only thing she could. She screamed long and loud until the pain overtook her and she blacked out.