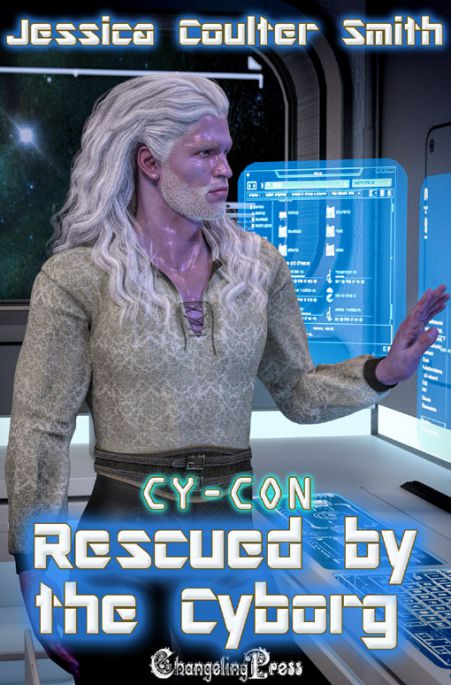 Magnolia Baker has spent most of her life in space with her father. Despite the rowdy crew, she’s been sheltered… until pirates board them and kill everyone in sight. She hides, avoiding them at all cost and praying for a miracle. Then more men board the ship. When a sexy cyborg finds her hiding in the cargo hold, she has the strange urge to trust him.

Zelranian cyborg, Lathim, has only ever wanted one thing. A mate. When he boards a stolen ship and finds a frightened human female, his protective urges take over. He’s seen human females before, but not once has his body responded to one. Until now. One look at Maggie and all he can think is — Mine.

Lathim sat in the captain’s chair and stared out into space. It had been ten years since they’d gained their freedom, such as it was. He thought about that long-ago day and knew they wouldn’t have done anything differently, even if it had meant being exiled by their people. The Zelranians had been intolerant and wouldn’t listen to reason, so Lathim and many others had taken a stand. It had meant an end to the Cy-Con program, which in his opinion wasn’t a bad thing.

“You look deep in thought,” Tenz said. ”You aren’t still upset about that whore screaming her head off when she saw us, are you? We knew it was bound to happen.”

“I’m tired of sex bots,” Lathim said. “No matter how realistic they make them look, they don’t feel the same as a living female.”

“If Zelran hadn’t labeled us renegades and used the terms ‘unstable’ and ‘dangerous’, I’m sure we wouldn’t have quite so much trouble. As it is, males want to challenge us and females fear us. If I could kick the Zelranian parliament’s collective ass, I would.” Tenz snorted. “Not like any of them have been in battle before anyway.”

“We’re closing in on the ship Titanium from Earth,” Rorwick reported. “It’s been marked as stolen by pirates, with enough goods on board we should be able to do a hefty trade and be set for a few months.”

“Shields or other defenses?” Lathim asked.

Lathim maneuvered the ship for the best possibly outcome. “Let me know when you’ve gained control of their systems.”

“Done,” Rorwick said, having linked with the Titanium using his neural transmitters.

Lathim fired three shots at the Titanium and waited for the ship to stop. He continued course until they pulled alongside. Blasting open the docking port, they connected to the battered ship and prepared to board. Lathim checked his weapons and waited for his crew to meet at the port. When they were ready, he sent the command for the doors to open, and he and his fellow cyborgs boarded.

They’d expected a crowd of pirates to attack, but the ship was eerily silent. Moving through the cargo hold, they fanned out with two remaining to guard the docking port, and scoured the ship for signs of life. As they neared the crew quarters, they saw what had happened to the original crew. The damn pirates had killed every last one and hadn’t bothered to even jettison them out of the airlock. The stench was horrendous as they moved through the ship and drew closer to the captain’s quarters.

The captain lay dead on the floor, his chest cavity opened and his heart removed, but the shredded clothing of a female drew Lathim’s attention. He knelt and picked it up, noticing it was free of blood. Whoever had worn it might very well still be alive, if she’d fought back and managed to break free. And if there was a human female on board, there might be a chance to save her. And if they saved her, maybe she’d show some gratitude in pleasurable ways. He’d of course seen human females before, but he’d never bedded one that wasn’t synthetic and looked forward to the experience.

“Find the woman,” Lathim said quietly. “But don’t scare her.”

Tenz snorted. “She’ll take one look at us and scream. The only Zelranians with white hair are those of us from the Cy-Con program. We’re hard to mistake for anyone else.”

“Just do it,” Lathim said tersely.

His men left and he scoured the chamber for any sign that the woman might still be nearby. After he cleared the captain’s quarters, he turned to leave, but as he neared the door, a sound stopped him. A slight whimper had come from somewhere in the room. His gaze scanned the area again, stopping on the cabinet across from him. Moving slowly, he eased the doors open, but it was empty. He heard movement behind him and spun, just in time to see a swatch of dark hair and a flash of pink skin disappear around the doorway and down the corridor.

Lathim took off after her, not wanting to scare her, but wanting to make sure she came to no harm in the event pirates were still on board. Whoever she was, she was damn fast, because she’d vanished by the time he entered the corridor. Opening communications with his shipmates, he notified them of the female’s presence and continued the search. He backtracked to the cargo hold and examined every corner, looking behind every crate.

The same small whimper drew him again. One of the crates was partially open, containing half a dozen sex bots and one very terrified human female. He lifted his hands to show her he wouldn’t hurt her and approached slowly. The female cowered and tried to make herself disappear into a corner of the crate.

Her wide eyes said she didn’t believe him, and he couldn’t blame her, not with the lies Zelran was spreading about his kind. He moved a little closer and watched as she trembled. He noted her lack of clothing, and cursed his body’s reaction to her. It had been a long time since he’d had a living female and not a bot, and she was damned tempting with all her sweet curves.